Van Buren County is committed to the preservation of farmland and other natural features.  The County Farmland and Open Space Preservation Ordinance establishes a countywide purchase of development rights program that will allow applicants to receive a cash payout for the development rights to their property. Residents in Townships that have updated their Master Plans to include an element of farmland preservation are eligible to apply for Purchase of Development Rights (PDR) grants whenever available from the State of Michigan.

The Land Preservation Board (LPB) was established by the Van Buren County Board of Commissioners in May of 2005.  The LPB committee members are appointed by the Board of Commissioners for a two year term, and represent interested parties stated in the By-Laws. Interested participants can apply to the County Administration office.  The LPB plays an integral role in this effort of preserving farmland.  Land Preservation Board meetings are now being held on a quarterly basis on the 2nd Floor of the Administration and Land Services Building, 219 Paw Paw Street, Paw Paw.

On September 27th 2007, Van Buren County successfully purchased their first set of development rights from Charles Lachman of Paw Paw Township.  Lachman owns an 81 acre parcel of land 1/2 mile south of Interstate 94 on M-51 Highway.  He received a cash payout for selling his development rights to the county through an annual state funded grant program.  The farmland will be permanently protected by a conservation easement that will prohibit development. 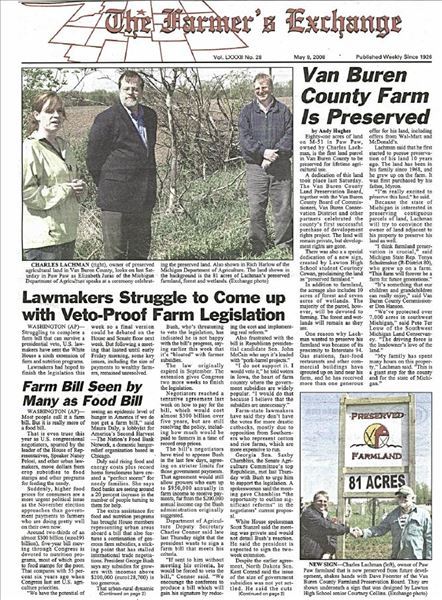 2008 the Land Preservation Board and Charles Lachman hosted a celebration at the Lachman farm to commemorate the first successful purchase of development rights on a Van Buren County Farm! Representative Tonya Schuitmaker, Pete TerLouw (Southwest Michigan Land Conservancy), Elizabeth Juras and Rich Harlow (Michigan Department of Agriculture) and Land Preservation Board Chair, Dave Foerster were also present to speak about the importance of this first preserved farm, the steps taken to get to this point, as well as where farmland preservation is headed in Van Buren County and the State of Michigan. Check out the article (left, click to enlarge) about the event published in the May 9, 2008 Farmer's Exchange.

Dick Godfrey - Board of Commissioners representative